Is the Open and Obvious Doctrine Really that Obvious? 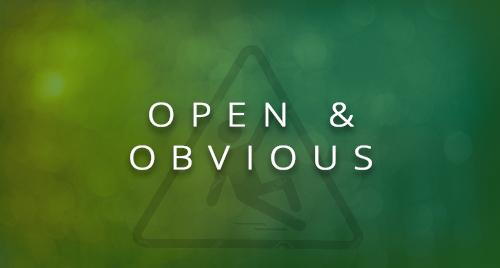 Substantive changes to the open and obvious doctrine in premises liability cases appear to be on the horizon. For decades, Michigan precedent held that premises possessors owe no duty to warn invitees of open and obvious hazards, unless that risk is unreasonably dangerous, then the premises possessor has a duty to undertake reasonable precautions to protect someone else from that risk. That precedent was set forth by the Michigan Supreme Court in Lugo v Ameritech Corp, Inc. , 464 Mich 512 (2001).

The open and obvious doctrine has been consistently applied to all kinds of slip/trip and fall cases, including snow and ice cases.  Michigan Courts have repeatedly held that the hazard presented by snow, snow-covered ice, and ice are open and obvious and there is no duty on the part of the premises possessor to warn of snow, ice, or snow-covered ice. The Court’s reasoning is based on the fact that wintry conditions, by their very nature, would alert an average person of ordinary intelligence to discover the danger presented by snow and ice upon casual inspection.

In considering the application for leave to appeal, the Michigan Supreme Court has requested oral argument and supplemental briefs on the following topics:

The issue of whether the snow-covered parking lot was effectively unavoidable is likely a very case specific, fact specific analysis.

The Supreme Court also is scheduling oral arguments on an application for leave to appeal in Pinsky v Kroger Co. of Michigan, 972 NW2d 256 (2022). This case involved a closed cash register lane at a Kroger store where there was a cable strung through a shopping cart closing the lane.  The plaintiff did not see the cable strung across and closing the aisle before her fall, but she did see it after her fall in photographs taken at the scene.  The Court of Appeals reversed a trial court decision denying the defendant’s motion for summary disposition and found that the cable closing the checkout lane was open and obvious; that an average person of ordinary intelligence in the same situation could have seen the cable upon casual inspection.  The Supreme Court requested the parties file supplemental briefs discussing:

The issue that all three of these cases are considering is whether Lugo’s open and obvious doctrine is consistent with Michigan’s comparative negligence framework.  The question posed by the Supreme Court seems to suggest that the Court is looking to shift away from open and obvious being a complete bar to premises liability recovery, and instead, focusing on principles of comparative negligence (i.e., how much negligence is there on the part of the plaintiff for failing to look where he/she is going versus how negligence can be attributed to the premises possessor for failing to warn or correct the hazard?)

We are continuing to monitor these cases and others to see how the Supreme Court rules and whether it moves away from the open and obvious defense in favor of a more comparative negligence approach. If the Supreme Court adopts the comparative negligence framework, trial courts would be more reluctant to grant summary disposition in premises liability cases and would necessarily result in these cases going to a jury to determine what percentage of fault should be attributed to the plaintiff versus the defendant(s).

Given this, we expect to see more slip/trip and fall cases filed in anticipation that the law will change.  However, it is important to recognize that right now, the open and obvious defense is still good law and still should be raised as a defense to premises cases.

At Bowen, Radabaugh & Milton, P.C., we offer a wide range of legal services to insurance carriers, and have the experience and knowledge necessary to advise on personal injury claims, including slip and fall accidents.

For more information about the changes to the open and obvious doctrine, call or email Joe Fazi at 248.940.2528 | [email protected].

Please fill out the form below and one of our attorneys will contact you.

Thank you. Your submission has been sent.

Attorney Advertising. This website is designed for general information only. The information presented at this site should not be construed to be formal legal advice nor the formation of a lawyer/client relationship. [ Site Map ]

See our profiles at Lawyers.com and Martindale.com